I picked up the Apple iPad camera connection kit for my iPad 2 a few months ago and I thought it would be worthwhile to share my experiences. Before purchasing the item myself, I read quite a few reviews on Apple's site as well as other reviews across the web. For the most part, the kit is well regarded with a few minor quibbles. My personal experience has been great and although I have only had it a short amount of time it has already saved the day on one occasion.

The kit comes with two dongles. One accepts SD cards directly and the other allows you to attach a USB cable. From what I read, the iPad does support quite a lot of different USB devices but mileage will vary. Regardless, I was only concerned with my primary camera (Canon 5D MkII), my iPhone 4 and one other older camera. As soon as I had my newly purchased connection kit at home I set about testing my devices. First up was the 5D MkII. I plugged the USB dongle in to the iPad and a USB cable connecting it to the camera. I turned on the camera and up popped a screen on the iPad to import the images. Within a few seconds I had copied across enough pictures and a short video for testing. The pictures, which were Canon raw (CR2) files worked flawlessly. The video however did not but this was an expected result from my research. 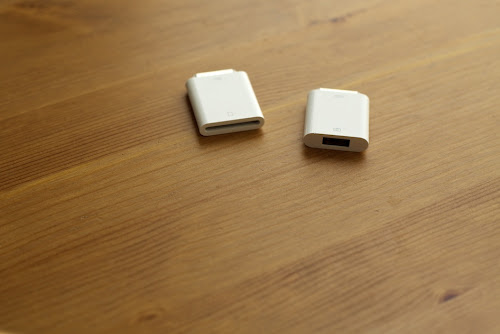 Next up was the SD card so I switched to the other dongle. Again, no problem pulling pictures from a Canon point and shoot SD card and this time the video worked. I switched back to the USB dongle and I tried copying the same images and video using a USB cable. This too worked perfectly.

For my final test I tried connecting my iPhone 4 using the USB dongle and a standard Apple ipod connector cable. Once again I was not disappointed, it worked without a hitch. I was quite impressed.

I had a couple of reasons for wanting the connection kit in the first place. One, I shoot a lot of pictures and video on my iPhone, especially on the road, and after the "hot tub incident" I thought it would be an excellent way to back up images and video without hauling a laptop around. Same applies for my SLR. The kit provides a simple and light weight method of backing up my images with less gear. My other reason was that the iPad would allow me to edit and share images easily. The camera connection easily met all my requirements and then some.

Last week my partner Jen and I were camping for 10 days and that provided a fabulous opportunity to give the kit a real road test. Every day during our trip I was shooting lots of pictures and video on my iPhone and every night I would load up the images and video on the iPad so we could both enjoy them on the bigger screen. And, as a bonus everything was backed up. For a couple of nights we had friends staying at our campsite and they really enjoyed seeing the images and video from the day of mountain biking on the larger iPad screen.

On the last two days of the trip I mostly shot images with my SLR and once again backed them up to the iPad. The iPad allowed me to check sharpness and other detail that is nearly impossible to gauge on the SLR's small LCD. And I was happier knowing I had the images in at least two places.

After arriving back home the kit cemented its place in my camera bag forever. Not long after arriving home I was snapping more pictures with my SLR and for better or worse it has become a habit of mine to format my memory cards before taking a new round of pictures. Normally I check the contents before formatting but on this particular night I had to catch a fleeting moment so out of habit I formatted the card and started shooting pictures. It wasn't until the next day that I realized that I had formatted the memory card I used on our camping trip without copying the images first. Luckily, I had the images on my iPad and it was a simple as using a free software tool called "iPhone Explorer" to pull them on to my Mac. The camera connection kit paid for itself with that one save.

So, if you couldn't tell I really like Apple's camera connection kit for iPad. It met all my needs simply and cheaply. My only caution would be to read Apple's technical details on the product before purchasing to make sure your devices are supported.