Today my "Photos and Videos" on Flickr surpassed ten thousand views! To me that felt like a pretty major milestone. 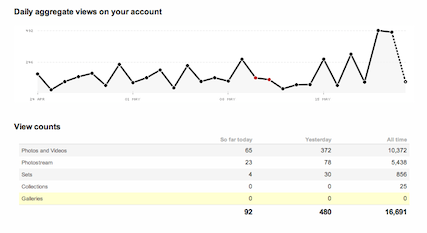 On March 8, 2010 my Flickr page had accumulated ten thousand total views. Just over two months later this same number had jumped to almost seventeen thousand. Wow! To put it in perspective though some users on Flickr get thousands of views per day, which is quite astounding in itself. There are plenty of amazingly talented people uploading their work and inspiring people such as myself and so many others every single day.

I originally joined Flickr because I wanted to be inspired and to learn from others. I certainly have been inspired (actually most times I am in complete awe of some of the talented people posting their work) and I have learned so much viewing the incredible photography on Flickr. And now as my views creep upwards it not only feels like an accomplishment but it also feels like me giving something, albeit small, back to this community of creatives.

It's a nice feeling.