I'm a Mac guy. Long story short I worked in the Information Technology field for over 22 years before moving to a career in Photography and during that time I spent a lot of time on personal computers running Windows. About three years ago I moved to a Mac as I say, "once you go Mac, you'll never go back".

OK, seriously, I really do love my Mac but enough said about that… for now. :)

About two weeks ago I used a built-in Mac OS X application called "Automator" for the first time. Automator is a simple yet incredibly powerful automation assistant. With it you can create workflows, scripts and even executables to manage mundane or very complex tasks. I've known about it for quite a while but never really had the inclination or need to try it out. But just a couple of weeks ago I finally had a reason to give it a try. I had a requirement to rename hundreds of digital images before uploading them to a website. Doing this task manually would have been a complete pain in the butt and likely would have been somewhat error prone. Using Automator for the first time ever it took me about three tries and 15 minutes to create a proper workflow. Awesome! I was quite impressed.

Today was the my second time using Automator and the results were equally impressive. This afternoon I had to resize a bunch of images for my website. Sure, it's something I could have done manually but why would I bother when I have this powerful ally on my side. I fired up Automator and using every bit of my 15 minutes of experience I cranked out a two step workflow in about 20 seconds. I'm not kidding. It was literally 20 seconds! After building my workflow I hit the "play" button and under 3 seconds later all my images had been shrunk to 50% of their original size. Simple, perfect and so, so easy. 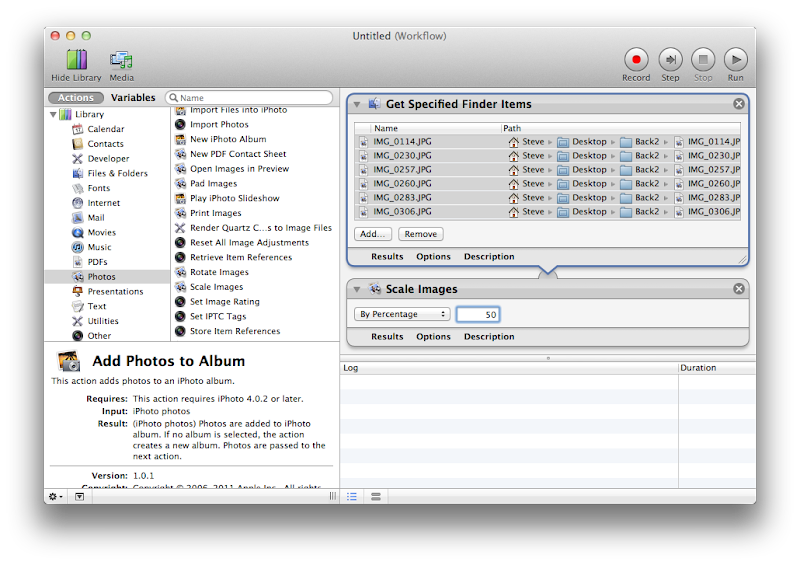