Yesterday was a very sad day for my partner Jen and I. We had to say goodbye to a wonderful, loyal companion of nearly 18 years, Jen's beloved cat Snoof. Her real name was Patches but she became a part of my life after Jen moved in with me almost 3 years ago and eventually she became known as Snoof. For some reason the name was the perfect fit for her personality. She was a bit aloof, she was bright and demanding but very loyal and loving. She was a tough, agile, spunky little girl in a small package. She was the Snoof.

Snoof was also quite camera shy. It would be very lucky to get a shot of her actually looking at the camera and nearly impossible for her to seem pleased about the process. As soon as the camera would come out, she would hide her face or completely turn her back to the camera. Sometimes I think she would toy with me and let me believe she was cooperating while I set up lights and umbrellas only to walk away just as the camera came out. On a few rare occasions I was able to grab a shot or two but now that she's gone I regret not making more of an effort to capture pictures and video of an amazing little cat.

It is easy to fall in to thinking the shot I didn't make today is the one I can make tomorrow. Sadly, tomorrow is sometimes too late. 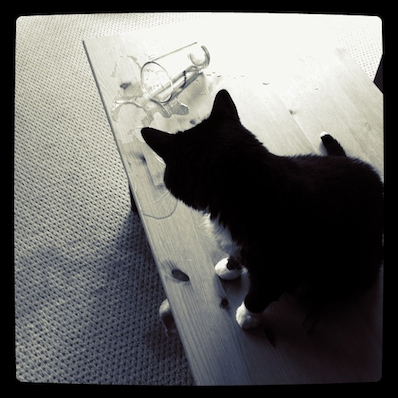