I had the opportunity and pleasure to be able to take pictures of my partner's nephew playing a football game at McMahon Stadium the other night. It was my first football shoot and even though it wasn't the big leagues I had a lot of fun and I got to practice some skills too.

The light in the stadium was pretty decent. It was about 1/160th to 1/200th of a second, f/2.8 (wide open for my 70-200mm) at ISO 1600. That is not too bad. Once I established where the lighting was at, I switched to manual exposure and dialed in my settings. Setting manual exposure tends to give more consistent results, especially when you know the lighting is not going to change. I'm sure for the kids games they only turn on barebones lighting so there may be a few dark patches but generally once you've established the exposure it should be reasonbly close. Televised games would likely be one to two stops better.

Here are a couple of shots from the game. I didn't bother with flash for the game shots, I thought it was best to stick with the ambient provided by the stadium lights. However at the end of the game I decided to augment with flash to make sure I got good coverage on my subject and to freeze motion as I was hand holding at pretty low shutter speeds. Using the flash reminded me of an old but valuable lesson - flash will only properly expose the subject. Not the background, not people a few meters behind the subject and certainly not a whole friggin' stadium! Only the subject, or any other objects on the same plane as the subject will be properly exposed. The reason is something called the inverse square law. Basically the inverse square law states if you double the distance from the light source you get a quarter of the intensity. Triple the distance and you get one ninth the intensity.

Here is a good photographic example. In the picture below I closed down the aperture to f/8 and let my flash illuminate the subject. At those exposure settings the ambient is pretty much zero -it's all flash. 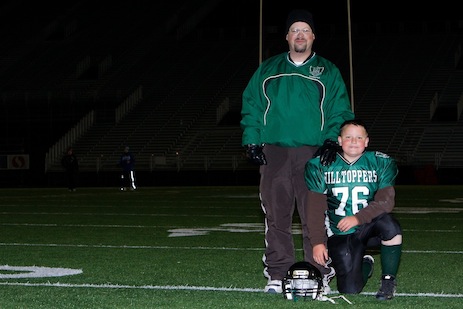 Pretty nasty. It's the typical shot you see from a point-and-shoot camera but it clearly illustrates that the light from the flash lights some of the foreground, the subject and then quickly fades to darkness ten yards later. It sure was handy to be on the field for the yardage. *grin*

A better shot is to set the exposure for the ambient light (or even a stop or two lower) and use the flash to fill in and freeze the subject.